Good Gear and Tools for Digital Nomads (with US shopping links)

Digital nomads need robust and flexible gear to perform their work duties. Because I frequently get asked for good traveling stuff this post recommends hardware and software for the Windows ecosystem and other things helpful for working while traveling.

If you’d like to support this blog you can do so by using the Amazon links:
–

If a product is available in the US only you can shop and ship with MyUS:
SHOP your favorite US Retailers and SHIP with MyUS!

For some items redundancy is mandatory because the whole business of a digital nomad relies on uninterrupted availability of computer and telecommunications gear:

Flexible, sturdy and expandable work horse. Sadly only available with the dreadful 16×9 (1920×1080) display aspect ratio. I5 CPUs are generally powerful enough. Consider upgrading RAM and SSD with 3rd party components to reduce cost (not as easy as with older ThinkPad models though). Make sure you get a 2015+ model with dedicated TrackPoint buttons. The 2014 model severely crippled the usefulness of the TrackPoint with buttons in the TrackPad only. If you want something more portable and fancy at the cost of flexibility go for the X1 Carbon (2015+).

Screen has a nice 3×2 aspect ratio for usage as tablet in portrait mode. Can replace the ThinkPad as a notebook if need arises.

The Microsoft Surface Book might be a viable alternative as primary notebook but it is extremely expensive. While it is really nice machine I prefer the ThinkPad/Surface combination especially because I like the ThinkPad TrackPoint better than any touch pad.

Install Win10 via the Windows Insider app. Good enough phone. Good size. So cheap that it is not a real problem if stolen or lost. Get the dual SIM version to conveniently use local SIMs. Get LTE for using it as mobile hotspot (backup for internet connectivity).

Cheaper than the Oasis version but with the same quality screen. Better than the Paperwhite because of separate paging buttons. No need for the 3G version: one can easily download via the phone hotspot. The Origami cover is very good for reading at a table. The additional neoprene cover protects against drops.

I don’t really fancy the G-Shock look but this watch is not bulky, still sturdy and very practical. Features world time, alarms that are loud enough for me, solar charging, auto light via turning wrist, auto time sync, water resistant to 200m, displays day of week, …
Pimp it with the way more comfortable resin band (Casio Part No 10323536) of the expensive GW-5000 version. I bought a couple from PacParts shipped to Germany via MyUs.com.

Surprisingly good and practical smart-watch. I bought it only to test custom tiles for my Travel Currencies app but found that I really like it.

Make your hotel TV a computer Monitor or watch a movie streamed from your notebook.

To add more ports to the Surface. Relatively small and flat adapter.

Very expensive but better than the rest. Good for long flights. Don’t expect too much: high frequencies are not filtered out as good as low frequencies.

Way smaller than over-ear version but not as good.

Folds flat so it does not crash the notebook or surface screen when carried in a pocket on top. Ergonomically acceptable – for extended usage a „real“ mouse is healthier.

A little large but flexible and better than loosing the tiny SIMs and SD cards.

Slow  – but small and reliable with very good handling.

I use the larger Business version.

Indispensable to keep stuff organized and for quick packing and unpacking. The Amazon basic version might be good too.

Very light, expandable with many pockets for easy packing. I prefer 2 wheeled ones because they are more sturdy, 4 wheeled ones are easier to handle in narrow trains etc.

Not having zippers makes this hard-shell suitcase little more tamper proof then soft-shell ones with zippers. Lacks pockets and separators for easier packing. Nice bright colors for easy spotting on luggage belts. 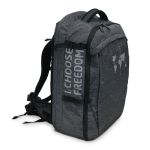 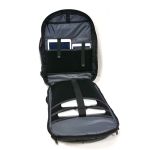 My favorite carry-on backpack for traveling with computer gear.

Maybe the best carry-on bag existing. Extremely expensive. Only sold from US. Get the Freudian Slip add-in to organize pens, paper etc.

Consider getting the lighter Halcyon material – I have the sturdier (and heavier) 050 denier ballistic nylon version which I find sturdier than needed.

A good alternative to the Tri-Star. Cheaper, lighter and more comfortable but no as business-like.

To support your neck while traveling in planes, buses and trains. This one I like best: small, comfortable, warm and light.

Might look to expedition-like for some. But very practical and a Kindle in its neoprene sleeve fits nicely into the large side pocket. 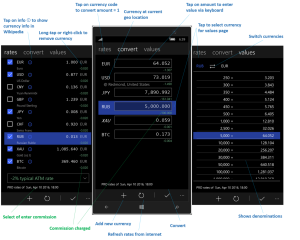 Install and update multiple commonly used tools (like FileZialla and Notepad++) at once. Nice clean unobtrusive UI. Get the pro version for automatic updates and to support the developers. Shame on Adobe for no longer allowing them to update Acrobat reader!

For presentations.
Zoom, paint and write on screen.

Private files should only be stored in the cloud being encrypted via a key controlled and known by the user solely (= end-to-end encryption). See Thoughts and Experiments on Cloud Encryption.

To manually encrypt files one can use 7-zip passwords.

To manually encrypt files, folders and drives
7.1a is that last usable TrueCrypt version. I have not experience with the alternatives.

DropBox in addition to OneDrive

Use DropBox in addition to OneDrive for redundancy and because OneDrive, while nicely integrated into Windows, currently is way slower and less reliable than DropBox.

Fortunately Microsoft reintroduced the Windows 7  file-based(!) backup with Windows 10 (they had discarded it with Windows 8x). It may not have the nicest UI but works way better and more reliable than all commercial alternatives (especially Acronis True Image) I tried. It still is difficult to find: search for „Windows 7 Backup and Restore“. I am not talking about the Image Backup which is available for Win7, 8+ and 10!

VPN for safety in hotel and other public WLANs and to access geo-blocked sites.

To plan and monitor trips. You can simply forward many booking confirmation emails (e.g. from Agoda) to plans@tripit.com and they get parsed and automatically added to your trip. The 3rd party MyTrips Windows Phone app is way better than the app from TripIt.

Local telephone number that reachesyou via Skype. For example I have a German Skype number that my parents (who don’t have internet) can dial from their telephone to reach me worldwide in Skype on all my devices.